TOP TEN BOOKS ABOUT THE BRITISH IN INDIA

Top 10 books about the British in India

If you ask any Indian writer which English book about India has meant most to them, the chances are they will say Kim. Yet it is an odd choice, this rambling story about an Irish vagabond orphan who is taken up by the British secret service and conscripted into the Great Game of repelling Russian influence in the Himalayas. But then Kim is a very odd book weaving together Buddhism and espionage, the colourful life of the bazaar and the Grand Trunk Road. Because it doesn’t exactly lead anywhere, it goes everywhere. It’s a children’s classic for grown-ups who are wide awake enough to get it.

Before the memsahibs came, lonely British officers consoled themselves with their Indian bibis. Some they abused and then deserted, but others they married and raised families with in those easy-going early days before the Raj got its name. Dalrymple tells in irresistible detail the saddest story of James Kirkpatrick, the British Resident in Hyderabad who built the most magnificent of all residencies there, and the enchanting Khair un-Nissa. He overcomes every obstacle to marry her, even converting to Islam. Then he dies when she is still only 19, leaving her to be taken up and then dumped by another British officer.

If Jane Austen had gone to India, these are the letters home she might have written. Emily Eden was the sister of George Auckland, probably the worst governor general of the lot. She was as gay, witty and caustic as he was stiff and prickly. Her travels across northern India not only provide a seemingly innocent but remarkably acute commentary on life at the top but also a rueful record of her brother’s disastrous policy in Afghanistan.

How did a few thousand British troops hold down a subcontinent of 200 million people? In his superb short history of the Indian army, Philip Mason, himself a longstanding officer in the elite Indian civil service, evokes the threads of loyalty that bound the British and the sepoys together until the threads snapped in 1857, and even after that brutal rupture were sewn up again, so that the British influence lingers on in the far larger army that independent India deploys today. 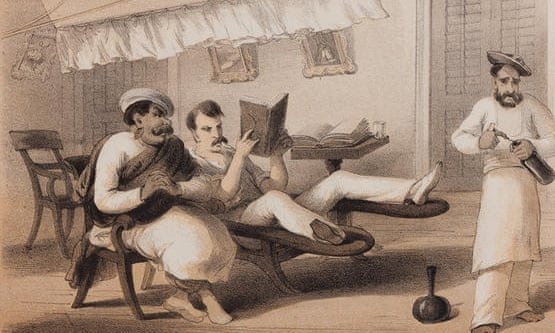 The subtitle of this delightful book of sketches is “The Ingredients of Social Life at ‘Our Station’ in India”. Captain Atkinson describes with a delicious wry touch the ramshackle routine in the backwoods of British India in the 1850s: the innocent young subaltern, the disillusioned old major with his Indian family, the mangy pack of hounds they hunt with and the even mangier cattle in the bazaar, the cigar-chomping padre, and the servants fussing around their sweating masters. Atkinson’s illustrations are as charming and piquant as his prose.

For the British, there was no more traumatic event in the entire 19th century than the Great Mutiny. The European officers were cut down by their own men whose loyalty they had trusted, and their women and children were butchered in what looks like a variety of ethnic cleansing. This savage ingratitude for the supposed blessings of British rule provoked a retaliation on a far greater scale, which shocked public opinion “at home” as much as the mutiny itself. Hibbert’s book is the best short account of those terrible months.

The massacre of the entire British garrison and their families at Cawnpore was the most shocking single episode in the Mutiny (vengeful British troops yelled “Remember Cawnpore” as they plunged in their bayonets). The perpetrators were made to lick up the blood of their victims before being slaughtered in their turn. There have been dozens of novels written about the Mutiny, but only Farrell’s Cawnpore approaches the condition of art.

The legendary white hunter Jim Corbett became famous first for killing the man-eating leopards and tigers who were preying on villagers in the hills of northern India. Later he became equally famous for his efforts to conserve their habitat and the national tiger reserve is today called Jim Corbett Park. This enthralling account of big-game hunting can safely be enjoyed by the most sensitive reader because it is about taking life only in order to preserve it.

I had misremembered Forster’s celebrated book as a rather prim and joyless novel against imperialism. When I came back to it years later, I found it luscious and funny. Of course the British are absurd and don’t understand India or the Indians, and Dr Aziz and Cyril Fielding cannot truly be friends until the Raj is over and done with. But when Forster toys with his characters, he toys so gently that they never cease to breathe.

It was the Raj Quartet that made Scott’s name, but I prefer the coda to the series. Staying On describes the intolerable Tusker, the retired Indian army officer who has made a financial horlicks by staying on in a small hill town after independence, and his long-suffering wife Lucy, who see their old world shrinking as the new India rises around them, literally so in the shape of the ghastly Shiraz hotel. Trevor Howard and Celia Johnson were perfect in the TV version, but the book is a joy and makes an elegiac farewell to the Raj.