Look Back in Anger The Kitchen Sink Drama: Perspectives and Criticism 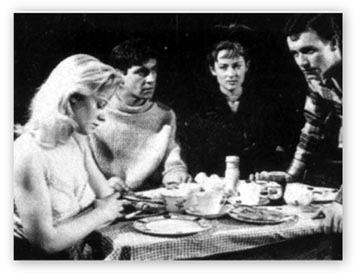 The 1950’s through the 1970’s saw the rise of one of the most important movements in modern British theater: the Kitchen Sink drama. These types of plays had several characteristics that distinguished them as a break from the forms of theater before them. They can be compared against theatrical movements such as avant garde theater, or the theater of the absurd, characterized by the plays of authors such as Samuel Beckett.

Perhaps the first, and most notable, characteristic of these Kitchen Sink dramas was the way in which they advanced a particular social message or ideology. This ideology was most often leftist. The settings were almost always working class. The previous trend in Victorian theater had been to depict the lives of the wealthy members of the ruling classes. These classes of people were often conservative in their politics and their ideologies. This was not the case for Kitchen Sink theater. The Kitchen Sink drama sought, instead, to bring the real lives and social inequality of ordinary working class people to the stage. The lives of these people were caught between struggles of power, industry, politics, and social homogenization.

Another chief characteristic of the Kitchen Sink drama was the way in which its characters expressed their unvarnished emotion and dissatisfaction with the ruling class status quo. This can be seen clearly in the play considered to be the standard bearer of this Kitchen Sink genre: John Osborne’s Look Back in Anger. In Osborne’s play, Jimmy Porter plays the role of the Angry Young Man. He is angry and dissatisfied at a world that offers him no social opportunities and a dearth of emotion. He longs to live a “real life.” He feels, however, that the trappings of working class domesticity keep him from reaching this better existence. His anger and rage are thus channeled towards those around him. Osborne’s play is a study in how this pent up frustration and social anger can wreak havoc on the ordinary lives of the British people.

Some critics have noted the irony in the term “Kitchen Sink drama.” The domestic world during this time was believed to be the domain of the feminine. Almost all of the major Kitchen Sink works which take place in the mid-twentieth century, however, are centered around a masculine point of view. These plays rarely centered around the emotions and tribulations of its women characters. The power dynamic between male and female often assumed to be masculine and is an unexamined critical component in many of these plays. Women are often assumed to serve the men of their household and, when conflicts do arise, it is often the man who is portrayed as the suffering protagonist. Women’s suffering is always a result of the suffering of the male.

Though Kitchen Sink dramas gained notoriety in twentieth century British culture for their unflinching anger and criticism directed towards the social, political, and economic establishment, the plays were also significant for the way they depicted the most intimate aspects of domestic life. This was in stark contrast to popular classical or Victorian dramas and comedies which largely centered around the public lives of socially established characters. Before the Kitchen Sink dramas, commentators have noted that in the mid-twentieth century, British theater still produced plays as if it were the nineteenth century. The Kitchen Sink drama, in contrast, moved the action and emotion of the theater from depictions of the public space of people’s lives into the most intimate of settings. The kitchen was considered to be the realm of the domestic, of females and servants, and Victorian drama often excluded any mention of it. Kitchen Sink dramas, however, turned this notion around and made the kitchen the center of familial and social life. In the case of the Porter’s attic apartment, the kitchen and living spaces were all one room on the stage. The boundaries of intimate domestic life and public life were blurred and created a realism not seen before in British theater.

Whether social or domestic, the Kitchen Sink drama changed the trajectory of British theater. Though many of the authors considered to have written in this genre such as Osborne, Arnold Wesker, Shelagh Delaney, and John Arden never claimed the title of Kitchen Sink dramatist, these author’s plays contained themes of common life that deeply resonated with British culture of the period. These types of plays signaled a resolute shift of British theater into the 20th century.