The novel is set in rural England in the early 19th century. Mrs Bennet attempts to persuade Mr Bennet to visit Mr Bingley, a rich bachelor recently arrived in the neighbourhood. After some verbal sparring with her husband, Mrs Bennet believes he will not call on Mr Bingley. Shortly after, he visits Netherfield, Mr Bingley's rented residence, much to Mrs Bennet's delight. The visit is followed by an invitation to a ball at the local assembly rooms that the entire neighbourhood will attend.

At the ball, Mr Bingley’s friendly and cheerful manner makes him popular with guests. He appears attracted to Jane Bennet (the Bennets' eldest daughter), with whom he dances twice. Bingley's friend, Mr Darcy, reputed to be twice as wealthy, is haughty and aloof, causing a decided dislike of him. He declines to dance with Elizabeth (the Bennets' second eldest daughter), stating she is not attractive enough to tempt him.[5] Elizabeth finds this amusing and jokes about it with her sisters.

Mr Bingley's sister, Caroline, later invites Jane to Netherfield for dinner. On her way there, Jane is caught in a rain shower and develops a bad cold, forcing her to stay at Netherfield to recuperate. When Elizabeth goes to see Jane, Mr Darcy finds himself becoming attracted to Elizabeth, while Miss Bingley grows jealous, as she herself has designs on Mr Darcy. 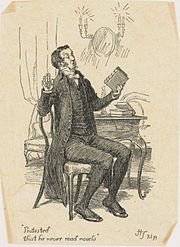 Mr Collins, Mr Bennet's cousin and heir to the Longbourn estate, visits the Bennet family. He is a pompous, obsequious clergyman who intends to marry one of the Bennet girls. After learning that Jane may soon be engaged, he quickly decides on Elizabeth, the next daughter in both age and beauty.

Elizabeth and her family meet the dashing and charming army officer, George Wickham, who singles out Elizabeth. He says he is connected to the Darcy family and claims Mr Darcy deprived him of an occupation (a permanent position as a clergyman in a prosperous parish with good revenue) promised to him by Mr Darcy's late father. Elizabeth's dislike of Mr Darcy is confirmed.[5]

At the ball at Netherfield, Mr Darcy asks Elizabeth to dance, and, despite her vow never to dance with him, she accepts. Excluding Jane and Elizabeth, several Bennet family members display a distinct lack of decorum. Mrs Bennet hints loudly that she fully expects Jane and Bingley to become engaged, and the younger Bennet sisters expose the family to ridicule by their silliness.

Mr Collins proposes to Elizabeth. She rejects him, to her mother's fury and her father's relief. Shortly after, the Bingleys suddenly depart for London with no plans to return. After Elizabeth's rejection, Mr Collins proposes to Charlotte Lucas, a sensible young woman and Elizabeth's friend. Charlotte, older (27), is grateful for a proposal that guarantees her a comfortable home. Elizabeth is aghast at such pragmatism in matters of love. Meanwhile, a heartbroken Jane visits her Aunt and Uncle Gardiner in London. It soon is clear that Miss Bingley has no intention of resuming their acquaintance leaving Jane upset, though composed.

In the spring, Elizabeth visits Charlotte and Mr Collins in Kent. Elizabeth and her hosts are invited to Rosings Park, the imposing home of Lady Catherine de Bourgh, imperious patroness of Mr Collins and Mr Darcy's wealthy aunt. Lady Catherine expects Mr Darcy to marry her daughter, as planned in his childhood by his aunt and mother. Mr Darcy and his cousin, Colonel Fitzwilliam, are also visiting at Rosings Park. Fitzwilliam tells Elizabeth how Mr Darcy recently saved a friend, presumably Bingley, from an undesirable match. Elizabeth realises the prevented engagement was to Jane and is horrified that Mr Darcy interfered. Later, Mr Darcy proposes to Elizabeth, declaring his love for her despite her inferior social rank. She rejects him angrily, stating she could never love a man who caused her sister such unhappiness and further accuses him of treating Wickham unjustly. Mr Darcy brags about his success in separating Bingley and Jane, and suggests that he had been kinder to Bingley than to himself. He dismisses the accusation regarding Wickham sarcastically, but does not address it.

Later, Mr Darcy gives Elizabeth a letter, explaining that Wickham, the son of his late father's steward, had refused the living his father arranged for him, and was instead given money for it. Wickham quickly squandered the money and when impoverished, asked for the living again. After being refused, he tried to elope with Darcy's 15-year-old sister, Georgiana, for her considerable dowry. Mr Darcy also writes that he separated Jane and Bingley because due to Jane's reserved behaviour, he sincerely believed her indifferent to Bingley, and also because of the lack of propriety of the other members of her family.

Elizabeth tells her father that Darcy was responsible for uniting Lydia and Wickham, one of the two earliest illustrations of Pride and Prejudice.[6] The clothing styles reflect the time the illustration was engraved (the 1830s), not the time in which the novel was written or set.

Some months later, Elizabeth accompanies the Gardiners on a tour of Derbyshire. They visit Pemberley, the Darcy estate (after Elizabeth ascertains Mr Darcy's absence). The housekeeper there describes Mr Darcy as kind and generous, recounting several examples of these characteristics. When Mr Darcy returns unexpectedly, he is exceedingly gracious and later invites Elizabeth and the Gardiners to meet his sister, and Mr Gardiner to go fishing. Elizabeth is surprised and delighted by their treatment. She then receives news that her sister Lydia has run off with Wickham. She tells Mr Darcy immediately, then departs in haste, believing she will never see him again as Lydia has ruined the family's good name.

After an agonising interim, Wickham has agreed to marry Lydia. With some veneer of decency restored, Lydia visits the family and tells Elizabeth that Mr Darcy was at her and Wickham's wedding. Though Mr Darcy had sworn everyone involved to secrecy, Mrs Gardiner now feels obliged to inform Elizabeth that he secured the match, at great expense and trouble to himself. She hints that he may have had "another motive" for having done so, implying that she believes Darcy to be in love with Elizabeth.

Mr Bingley and Mr Darcy return to Netherfield. Bingley proposes to Jane, who accepts. Lady Catherine, having heard rumours that Elizabeth intends to marry Mr Darcy, visits Elizabeth and demands she promise never to accept Mr Darcy's proposal. Elizabeth refuses and the outraged Lady Catherine leaves. Darcy, heartened by his aunt's indignant relaying of Elizabeth's response, again proposes to her and is accepted. Elizabeth has difficulty in convincing her father that she is marrying for love, not position and wealth, but Mr Bennet is finally convinced. The novel concludes with an overview of the marriages of the three daughters and the great satisfaction of both parents at the fine, happy matches made by Jane and Elizabeth.

First Impression is not the last impression