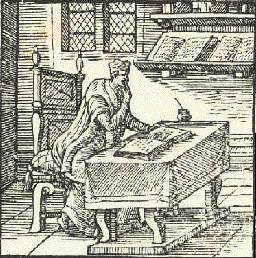 A scholar writing. "Silentium" from Geoffrey Whitney, A Choice of Emblems.

The decade of the 1590s, just before Shakespeare started his career, saw a radical transformation in popular drama. A group of six feisty, well- educated men chose to write for the public stage, taking over native traditions. They brought new coherence in structure, and real wit and poetic power to the language.

As the title of this page suggests, they are known collectively as the "University Wits," though they did not always work as a group, and indeed wrangled with each other at times.

Prominent members of this group were Christopher Marlowe, Robert Greene, and Thomas Nashe from Cambridge, and John Lyly, Thomas Lodge, and George Peele from Oxford. Thomas Kyd is also sometimes included in the group, though he is not believed to have studied at university.

This diverse and talented loose association of London writers and dramatists set the stage for the theatrical Renaissance of Elizabethan England. They are identified as among the earliest professional writers in English, and prepared the way for the writings of William Shakespeare, who was born just two months after Christopher Marlowe.

The term "University Wits" was not used in their lifetime, but was coined by George Saintsbury, a 19th-century journalist and author.[1] Saintsbury argues that the "rising sap" of dramatic creativity in the 1580s showed itself in two separate "branches of the national tree":