Development of Prose in Romantic Age

The period between 1780 and 1830 is popularly known as the Romantic Age. It is generally believed that the English Romantic Movement began in 1798, with the publication of The Lyrical Ballads. The Romantic Movement began as a reaction against the artificiality of the Pseudo-classics. ‘Return to Nature’ played a very important role in the revival of Romanticism. People were suffocated with the restricted rules and regulations. They were in search of freshness of Nature. They wanted to return to the free and refreshing life of the world of leaves and flowers.

Chief characteristic of The Romantic Age
The Romantic Revival is characterized by several characteristics such as;
The Romantic period specialized in poetry and we have greatest romantic poets like William Wordsworth, Coleridge, Shelley and Keats. But there also appeared a few prose writers on the literary canon of Romantic era. Prose writers like Charles Lamb Hazlitt and Thomas De Quincey who rank very high.
Romantic Prose Characteristic

Romantic Prose is not basically based on love stories though some of the novels do have a romantic elements. Romantic prose refers to the prose written in Romantic periods. Here are the some main characteristic of the prose of Romantic Age.

The literature of age of Enlightenment put more emphasis on logic, science and reason. While the Romantic literature put more stress on imagination, emotions and intuitions elements of humanity that can defy reason.

Nature at the centre

In the Romantic prose, Nature remains at the centre. Romantic essayist and poets focused on connecting with natural world.In this way they tried to escape from troubles of world, in search of peace of mind in nature.

Transcendentalism
Transcendentalist Movement was a reaction against 18th century rationalism. This movement was based on fundamental belief in the unity of world and God. Soul was thought to be the world. Thus individual soul identified with God.

The works of this age are also marked by the elements of Melancholy. Romantic poet showed their interest and included elements of melancholy in their work.

The Essayist and poets of this age showed their interest in the common man. The essays of this age reflect the feelings of Humanitarianism.
The prose writing of this age can be divided into two parts;

The Romantic essay was influenced by the writings and style of Rousseau and Montesquieu. Though some Romantic poets Coleridge, Keats, Byron, Shelley wrote excellent prose in their critical writings, letters and journals. Some of the Novelist like Jane Austen were master of prose-style.
The essays of Charles Lamb, William Hazlitt and others were very personal in style and autobiographical in nature. They wrote prose for its own sake in the form of the essays and attained excellence in the art of prose writing. Many of these writers were interested in the Psychology and personality of human beings. The essays were often explorations of their own mental states and emotional conditions. In this way subjective tone informs many of these essays and non-fictional prose, even when the author is writing a so called objective critical essay.
So, let’s have a look on the major prose writers of romantic age. 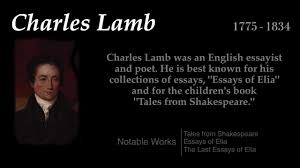 Most popular essayist of this period is Charles Lamb. He is the most lovable of all essayist and in his hand the essay reached its perfection.  He lived a very humble, honest and most self sacrificing life. He never married, but devoted his life in taking care of his sister Mary, who was subject to mental fits in one of which she had fatally wounded her mother.A friend of Coleridge and Wordsworth, Lamb is most famous for his “Essay of Elia” and “Tales from Shakespeare”, co-authored with his sister Mary. The style of Lamb is described as ‘quaint’ because it has the strangeness which we associate with something old-fashioned. We can easily trace in his English the imitation of the 16th and 17th century writers he most loved Sir Thomas Browne, Fuller, Milton and sirIsac Walton.

The works of Charles Lamb can be divided into three periods. The first period is his early literary efforts , it includes the poems “C.L.” in Coloridge’s Poems on Various Subjects(1796), his romance Rosamund Gray (1798). It also includes his poetic drama John Woodvil (1802) and various other immature works in prose and poetry.

His second period was largely devoted to the literary criticism, and the Tales from Shakespeare, the former reproducing the tragedies and the latter the comedies, it may be regarded as his forst successful literary venture. In 1808 , Specimens of English Dramatic Poets Contemprory with Shakespeare was appeared. The third period includes Lamb’s criticism of life, which are gathered together in his Essay of Elia (1823) and his Last Essays of Elia.

The style of all these essays is gentle, old-fashioned, irresistibly attractive. Lamb was especially fond of old writers, and borrowed unconsciously from Browne’s Religio Medici and from the early dramatist.

William Hazlitt had almost no formal education but cultivated an avid interest in literature and painting. William is a more vigorous and less mannered essayist than Lamb. He was an independent spirit and maintained his radicalism throughout his life. Hazlitt wrote many volumes of essays. His first publication was the philosophical psychological tract, “An Essay on the Principles of Human Action” (1805). Lecturing on Shakespeare which appeared as “Characters of Shakespeare’s Plays” in 1817. His later works such as Lectures on the English poet(1818), Lectures on the English Comic Writers (1819) and Lectures on the Dramatic Literature of the age of Elizabeth (1820) originated his reputations as leading literary critic as well as his characteristics energy and enthusiasm are exhibited in these collections. The style of Hazlitt has force, brightness and individuality. Here and there we find passages of solemn and stately music, It the reflection of his outspoken, straightforward and frank personality. As he had read widely and his mind was filled with great store of learning. His writings are interspersed with sentences and phrases from other writers and there are also echoes of their style.


Thomas de quince is famous as the writer of impassioned prose. De Quincey is well known today for his classic The Confessions of an English Opium-Eater (1822). He was born into wealthy family, but soon squandered his wealth. Initially published anonymously, De Quincey’s work became popular enough to demand a second expanded version in 1856. The specialty of his style be formed in describing incidents of purely personal interest in language suited to their magnitude as they appear in the eyes of the writer. His prose works are more imaginative and melodious than many poetic works. The only defects of his style are that he digresses too much and often stops in the midst of the fine paragraph to talk about some trivial thing by way of jest. But in spite of these defects his prose is still among the few supreme examples of style in English language. He was a highly intellectual writer as well as his interests were very wide. He wrotemostly in the form of articles for journals and he dealt with all sorts of subjects about himself and his friends, life in general, art’ literature,philosophy and religion.
The other two prominent female writers of Romantic prose writings   are Jane Austen and Mary Shelly. Let’s have a look at the some glances on these influential prose writers.

Jane Austen is another influential English women prose writer of Romantic era. Her romantic fiction set among the gentry and earned her a place as one of the most widely read and most beloved writers in English literature. Amongst scholars and critics Austen’s realism and biting social commentary have cemented her historical importance as writer. She was educated primarily by her father and older brothers as well as through her own reading. Austen’s artistic apprenticeship lasted from her teenage years until she was about thirty five years old. After the publication of her nephew’s “A Memoir of Jane Asuten” , she came into the limelight before it she only got a little personal fame and only a few positive reviews. By the 1940s she had become widely accepted in academia as a great English writer. Her noteworthy works are Sense and Sensibility (1811), Mansfield Park (1814), Pride and Prejudice (1813), Emma (1815). She also wrote two additional novels Northanger Abbey and Persuasion, both published posthumously in 1818.

Mary Shelley was a daughter of feminist Mary Wollostonecraft and philosopher William Godwin. Mary Shelley was educated at home. Being a wife of P.B. Shelley, she also promoted the works of him. She was known mainly for her efforts to publish P.B.Shelley’s works and her well known gothic novel Frankenstein. This novel was published when she was 21. The novel deals with the ambitious young scientist who wanted to be the creator of life. And his quest of new kind of creation is rewarded as horrible situation. His quest for knowledge and power has ended in his own destruction. She also remained a political radical throughout her life.
Conclusion

Basically Romantic era is marked by influential romantic poems like William Wordsworth, Coleridge, John Keats, Lord Byron and P.B.Shelley. But there was also a prose writers like Charles Lamb, William Hazzlit, Jane Austen and Mary Shelly, who contributed a lot in the development of the prose writing in the Romantic age.
at April 24, 2020