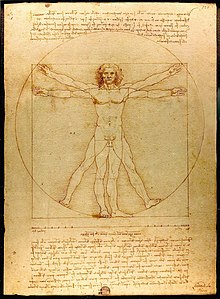 Leonardo da Vinci's Vitruvian Man (c. 1490) shows the correlations of ideal human body proportions with geometry described by the ancient Roman architect Vitruvius in his De Architectura. Vitruvius described the human figure as being like the principal source of proportion among the Classical orders of architecture.
List of the First Humanists
Some of the first humanists were great collectors of antique manuscripts, including Petrarch, Giovanni Boccaccio, Coluccio Salutati, and Poggio Bracciolini. Of the four, Petrarch was dubbed the "Father of Humanism" because of his devotion or loyalty to Greek and Roman scrolls. Many worked for the Catholic Church and were in holy orders, like Petrarch, while others were lawyers and chancellors of Italian cities, and thus had access to book copying workshops, such as Petrarch's disciple Salutati, the Chancellor of Florence.

Poetry became my passion after I fell in love with Walter de la Mare's "Silver" in Mrs. Edna Pickett's sophomore English class circa 1962.

Introduction and Text of Sonnet 75

Sir Edmund Spenser is credited with the creation of an eponymous sonnet style, taking his place along with such luminaries as Petrarch, Shakespeare, and Milton. The Spenserian sonnet was featured in the poet's epic poem, The Faerie Queene. That style sonnet is also referred to as the Spenserian stanza when referring to his long poem.

One of Edmund Spenser's most widely anthologized sonnets is "One day I wrote her name upon the strand," number 75 in his sonnet sequence, Amoretti. In this sonnet, the speaker addresses indirectly his beloved, attempting to convince her that their love will live eternally.

(Please note: The spelling, "rhyme," was introduced into English by Dr. Samuel Johnson through an etymological error.

Sonnet 75: "One day I wrote her name upon the strand"

One day I wrote her name upon the strand;
But came the waves, and washed it away:
Again, I wrote it with a second hand;
But came the tide, and made my pains his prey.
Vain man, said she, that dost in vain assay
A mortal thing so to immortalize;
For I myself shall like to this decay,
And eke my name be wiped out likewise.
Not so, quoth I, let baser things devise
To die in dust, but you shall live by fame:
My verse your virtues rare shall eternize,
And in the heavens write your glorious name.
Where, when as death shall all the world subdue,
Our love shall live, and later life renew.