Some Facts of English Renaissance -2

13.Sir Thomas Elyot (c. 1490 – 26 March 1546) was an English diplomat and scholar. He is best known as one of the first proponents of the use of the English language for literary purposes.
14.Giovanni Florio (London, 1553 – Fulham, 1625), known as John Florio, was a translator, poet, playwright, linguist, lexicographer, and royal language tutor at the Court of James I. He is recognised as the most important humanist in Renaissance's England,and he was also the first translator of Montaigne into English and he wrote the first comprehensive Dictionary in English and Italian (surpassing the only previous modest Italian–English dictionary by William Thomas published in 1550). He has been proposed as the real author of Shakespeare's works.
15.Arthur Golding (c. 1536 – May 1606) was an English translator of more than 30 works from Latin into English. While primarily remembered today for his translation of Ovid's Metamorphoses because of its influence on William Shakespeare's works, in his own time he was most famous for his translation of Caesar's Commentaries, and his translations of the sermons of John Calvin were important in spreading the doctrines of the Protestant Reformation.
16.Sir Thomas North (1535–1604) was an English justice of the peace, military officer and translator. His translation into English of Plutarch's Parallel Lives is notable for being a source text used by William Shakespeare for several of his plays.
17.Sir John Harrington , was an English courtier, author and translator, popularly known as the inventor of the flush toilet.He became prominent at Queen Elizabeth I's court, and was known as her "saucy Godson", but his poetry and other writings caused him to fall in and out of favour with the Queen. His best-known work today, A New Discourse of a Stale Subject, called the Metamorphosis of Ajax (1596) is a political allegory and a coded attack on the monarchy. His New Discourse described a forerunner to the modern flush toilet that was installed at his house at Kelston.

His attempt at a translation of Ariosto's Orlando Furioso caused his banishment from court for some years. Angered by the raciness of his translations, Elizabeth told Harington that he was to leave and not return until he had translated the entire poem. She chose this punishment rather than actually banishing him, but she considered the task so difficult that it was assumed Harington would not bother to comply. Harington, however, chose to follow through with the request and completed the translation in 1591. It received great praise, and is one of the translations still read by English speakers today.

19.George Chapman In 1598, Chapman published a translation of Seauen Books of the Iliades and most of book 18 of the Iliad under the title, Achilles Shield. In 1609, the first twelve books were published, followed by the translation of the entire poem in the edition of 1611, of which our copy is an example. In an introductory letter, “To the Reader,” Chapman rejects verbatim translation on the grounds of inelegance:

Their word-for-word traductions (where they lose
The free grace of their natural Dialect
And shame their Authors, with a forced Glose)

In fact, to embellish the English version, Chapman often took poetic license, going as far as adding words and phrases not in the original. For instance, “Hades” is “the invisible cave that no light comforts.” And, as it was fairly typical of the early-modern translator, Chapman also made use of annotated Latin versions, such as the edition of Jean de Sponde published in Basel in 1583, which included a Latin translation paralleling the original Greek.

20.The Defence of the Seven Sacraments is a theological treatise published in 1521 , written by King Henry VIII of England, allegedly with the assistance of Thomas More.

Henry started to write it in 1519 while he was reading Martin Luther's attack on indulgences.

It was dedicated to Pope Leo X, who rewarded Henry with the title Fidei Defensor (Defender of the Faith) in October 1521 (a title revoked following the king's break with the Catholic Church in the 1530s but re-awarded to his heir by the English Parliament).

21..Nicholas Hilliard was an English goldsmith and limner best known for his portrait miniatures of members of the courts of Elizabeth I and James I of England. He mostly painted small oval miniatures, but also some larger cabinet miniatures, up to about ten inches tall, and at least two famous half-length panel portraits of Elizabeth. He enjoyed continuing success as an artist, and continuing financial troubles, for forty-five years. His paintings still exemplify the visual image of Elizabethan England, very different from that of most of Europe in the late sixteenth century. Technically he was very conservative by European standards, but his paintings are superbly executed and have a freshness and charm that has ensured his continuing reputation as "the central artistic figure of the Elizabethan age, the only English painter whose work reflects, in its delicate microcosm, the world of Shakespeare's earlier plays."

22. Thomas Harriot 1560 –  1621), also spelled Harriott, Hariot or Heriot, was an English astronomer, mathematician, ethnographer and translator who made advances within the scientific field. Thomas Harriot was recognized for his contributions in astronomy, mathematics, and navigational techniques.Harriot worked closely with John White to create advanced maps for navigation.While Harriot worked extensively on numerous papers on the subjects of astronomy, mathematics, and navigation the amount of work that was actually published was sparse. So sparse that the only publication that has been produced by Harriot was The Briefe and True Report of the New Found Land of Virginia.The premise of the book includes descriptions of English settlements and financial issues in Virginia at the time.He is sometimes credited with the introduction of the potato to the British Isles.Harriot was the first person to make a drawing of the Moon through a telescope, on 26 July 1609, over four months before Galileo Galilei.

23.SLAVERY IN ENGLAND DURING ELIZABETHAN AND JACOBEAN AGE

Let us read these paragraphs from NORTON ANTHOLOGY about slavery 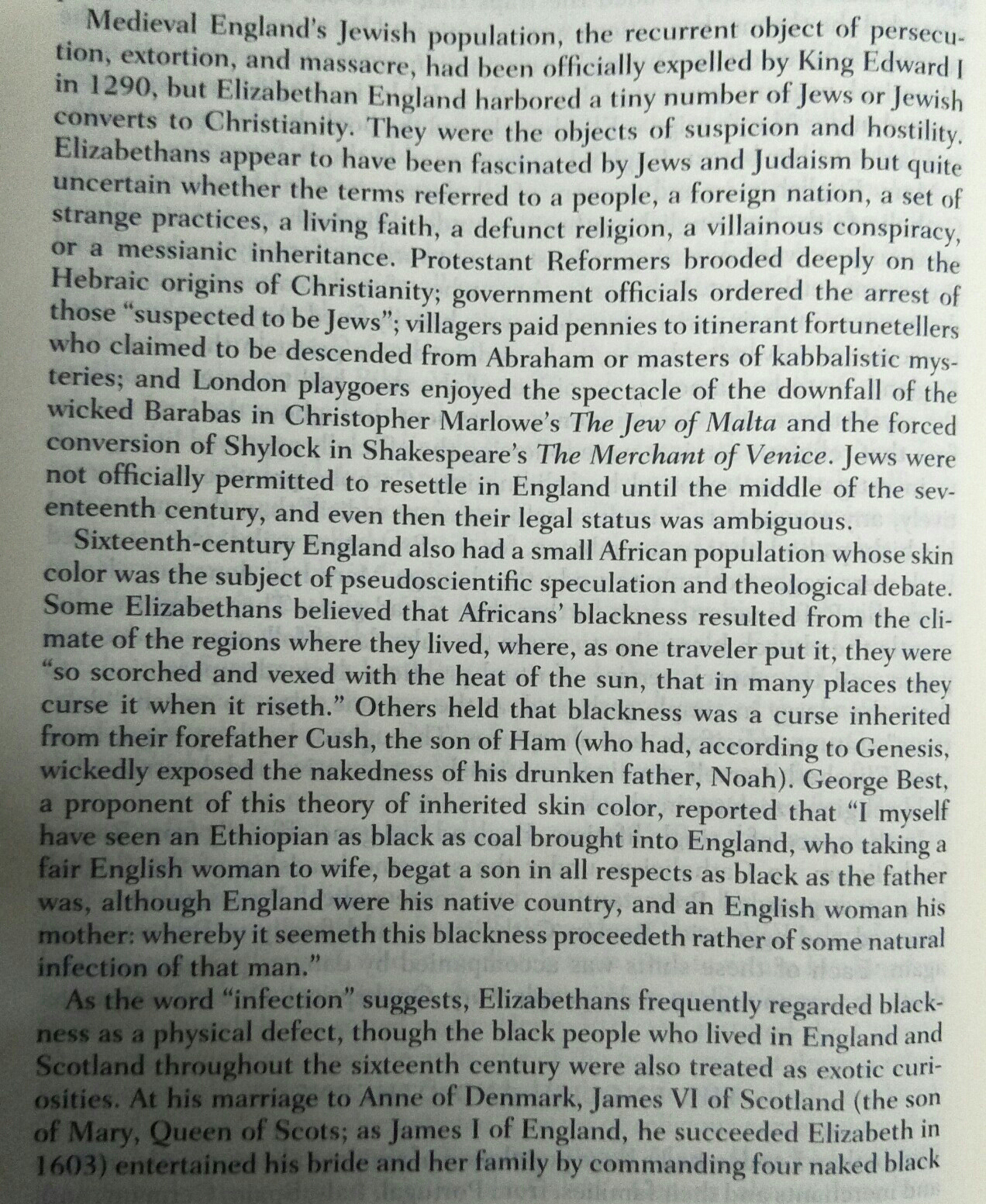 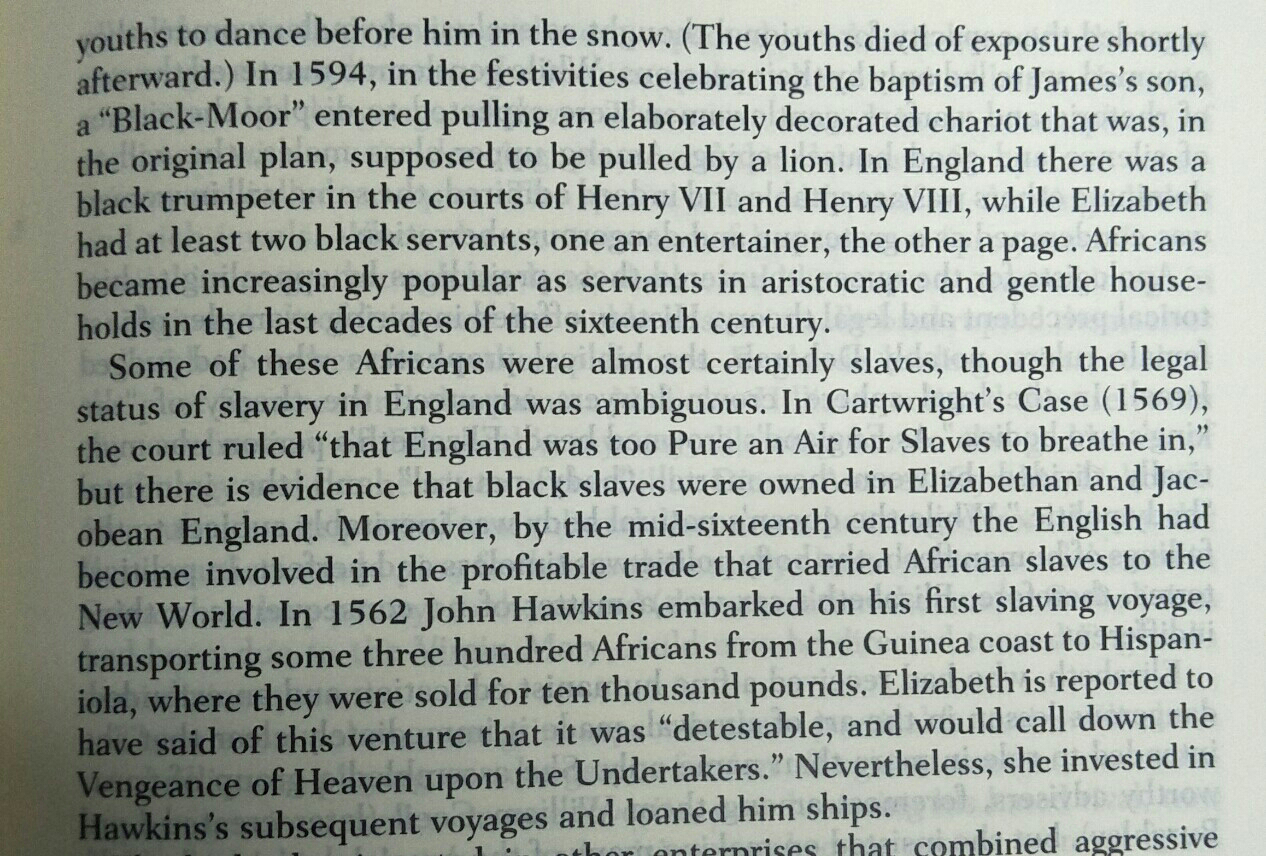 A LITANY IN TIME OF PLAGUE